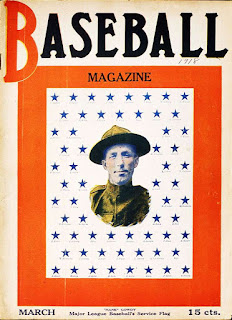 Hank Gowdy was a darn good baseball player in 1914. He was catcher with these "Miracle" Boston Braves. They beat the highly favorite Philadelphia Athletics led by Connie Mack. Hank batted a hefty .515 in this World Series, as well as hitting the only homerun. During this so-called "dead ball" era, the role of catcher was quite difficult. Bunts and stolen base attempts were very common. Gowdy twice led the leagues in putting base stealers out. Pitchers made the catcher's job even more difficult, as doctoring the ball was legal and prevalent.

But we think his best claim to fame is the fact that he was the first Major Leaguer to enlist for World War I. He enlisted in 1917 and saw considerable combat. He returned to baseball in 1919 at his old position.

Hank Gowdy spent time with both the Braves and Giants, totaling 17 years in the Majors.

Of course that's not all. Mr. Gowdy, at the age of 53, enlisted into World War II. He was promoted to major. Serving at Fort Benning, near Columbus, Georgia, the baseball field was renamed Gowdy Field.

So, Hank Gowdy is the only Big Leaguer to serve in both World Wars.

Gowdy's talent as catcher and longevity, could be grounds for The Hall of Fame. But of course not putting up sensational offensive numbers have hurt his cause. Even though he was great defensively.

He actually broke a Hall of Fame custom. Players are only supposed to get 15 chances, but he received votes in 17 years.

He does hold that record. The most times on a ballot, and never being voted in.

Perhaps the Veteran's Committee should be retooled, somewhat.