How to Fly the Flag 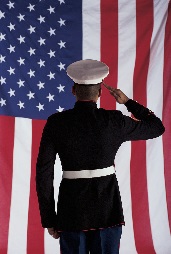 Don't let the flag touch the ground or floor.
If the American Flag is displayed with other flags, it should be in the center and higher than all the rest
The Flag should never be flown upside down.
The American Flag can be displayed at night if it is lighted.
The flag should be taken down in rough weather.
If the flag is carried with other flags, such as a parade or procession, the American Flag should be to the right of all flags or in front at the center.
There is some debate about weather the flag should be worn as clothing. Probably using a real flag as clothing is borderline disrespectful. But if a hat, shirt, or other clothing has parts that look like a flag, and in good taste, it can be a sign of patriotism.
We also feel it is okay to decorate items that will be thrown out after use, such as napkins, cups, and party items. Again, use your discretion to be patriotic and respectful.
There are many days you can display the flag. We would like to see flags fly year-round. However, we certainly think the following days are a must for flying the Flag of the United States:
Any election day
Presidents Day 3rd Monday in February
Memorial Day last Monday in May
Flag Day June 14th
4th of July
Labor Day 1st Monday in September
September 11th
Veteran's Day November 11th
Thanksgiving Day 4th Thursday in November
Pearl Harbor Day December 7th
And any other occasion you can think of!