200 United States Marines are now patrolling the coast of Guatemala. Why? To combat drug trafficking. This is another stage of Operation Martillo that was started in January of this year to help in the war on drugs from Central America.

This is the first time ever that Marines have been used for this specific purpose. They are joining other Central American Countries who have sent law enforcement personnel, including others from Britain, France, and Canada.

The number of troops at 200 is quite large, and one of the largest involvements in that region of the world ever.

The Marines have been training at Guatemalan air base at Retalhuleu, and they also brought along four UH-1 "Huey" helicopters.

The main emphasis will be on patrolling the coast, looking the fast powered smaller boats, as well as what are called "narco-submarines" that can travel underwater for up to 5,000 miles. Over eighty percent of the cocaine that gets to the United States comes from this region.

The goal is to stop it before it gets here.

Since the civil war in Guatemala in 1978, when the United States dropped some aid, efforts have been made steps to get back into good graces. Allowing Marines to help in the war on drugs is one of those steps. This is a small step, as the Guatemala is still rife with corruption and violence.

So, do you think this is a good use of our Marines and military?

>>The Biggest Wave Ever Surfed!

The past few years has seen plenty of war action for our men and women in the military. From Iraq to Afghanistan, our military has been very active doing their jobs, serving this country. Because of newer guidelines and old barriers being broken, women are now seeing roles in what is in effect, combat. The United States for the first time in history has many women returning as "real" war time veterans. Never before have women taken such an active role. There are a few female combat veterans now running for political office. Here are the ones we know about.

Tammy Duckworth was a captain with the Army National Guard. She was co-pilot of a Black Hawk helicopter that was struck down in Iraq, 2004. She lost parts of both legs. This is her second time running. She is an Illinois Democrat running against Tea Party freshman Joe Walsh. Duckworth was also assistant secretary at Veterans Affairs. They are running for The House of Representatives. Tammy Duckworth has just paid $2000 in back taxes and penalties due to improperly taking two homeowner exemptions.

Tulsi Gabbard was also with the Army National Guard. This specialist in the medical unit, 29th Brigade, trained Kuwaiti anti-terrorism units. Gabbard is 31 and resides in Hawaii. She is a democrat, running for a seat in The House of Representatives.

An Air Force Academy graduate, Martha McSally, is actually the first women to ever fly a fighter in real combat. Her aircraft? An A-10 Warthog (A-10 Thunderbolt II). She also commanded a fighter squadron, also a first for females. McSally, a Republican, is vying for the seat formerly held by Gabrielle Giffords.

Think your vote does not matter? It matters to the races these women are in. Just like all other political races. So, get out and vote. Only you can make a difference in where this country is headed. Your vote serves two purposes. It puts people in office who will do the right thing, but it also prevents people who should not be elected.

USS Constitution to sail under own power

The USS Constitution to sail under its own power for just the second time in more than 100 years.

The USS Constitution is the oldest commissioned warship still operating anywhere in the world.

It earned the nickname "Old Ironside" in a battle during the War of 1812. The USS Constitution got the better of the HMS Guerriere from Britain.

The ship will sail in and around Boston Harbor to commemorate that battle.

The USS Constitution first sailed in 1797 and stopped sailing under its own power in 1881. 200 years later, it sailed again. 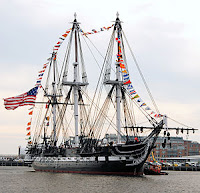